Francis (Gus) Kearns_St George and the Dragon FMP from Gus Kearns on Vimeo.

I assembled a rough cut of the film in Premier Pro over the course of shooting.  This was to give me an impression of what the final film would be.  More complex shots, such as the fire breathing and juggling, were imported into After Effects for the intricate editing process. 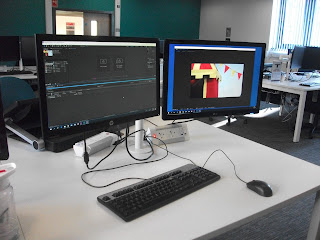 The fire breathing effect was achieved by overlaying a fire blast effect over the footage.  This effect was available for free from ActionVFX.com.  I tweaked the footage to appear more integrated in the scene.  I added a few final additions, such as the flame effect on the torch and rendered out the shot to finish.

For the juggling shot, I composited out the rigging in every frame of footage.  This was done in After Effects.  While shooting this shot I ensured to take a few frames with the characters out of the frame.  This gave me a base plate which I overlayed the juggling footage over the top with the rigging masked out. 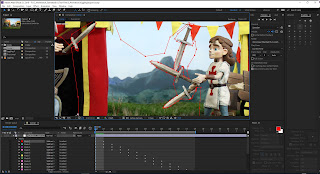 I put together an end credit sequence in Photoshop.  I used various medieval fonts found online as well as a high-res parchment image for the backdrop.  The black and red text reinforce the olde-worlde aesthetic but also conveniently matched the colours of the Staffordshire University logo on the final title. 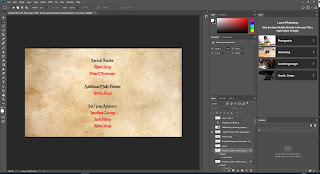 I finally edited all the completed shots in Premier Pro and included the soundtrack and sound effects (As detailed earlier).

Upon completion of the puppets and set, I began the animation process.

I set up a total of five lights up around my set to give the scene a bright and clean, children's animation aesthetic.  I also set up a separate small puppet repair booth behind the animation table.  This was of great use when the puppets were damaged or needed element replacing, such as mouths.

The tie down process of drilling into the set and screwing the puppets in place, was as effective as I was hoping it would be.  The holes left in the set were virtually unnoticeable in the animation and could be cleaned out in post.  I also utilized a small vacuum to clear away any dust left on the set after drilling.

I made use of a large screen which came with the room I used.  This allowed me to check my progress while animating the puppets during production.  I made sure to glue all the lights and the animation table to the ground so that any accidental bumps or nudges would not ruin a shot. 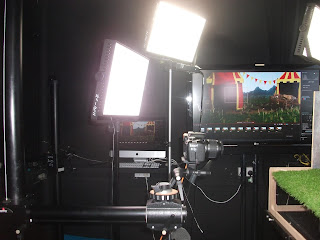 The film is animated mostly on 2's.  I occasionally animated on 1's for quick movements which would otherwise look awkward on 2's.  This method allows me to animated more rapidly than I would have had I been animating solely on 1's.  This process of animation is used by Aardman and Factory Create.  Seeing as these companies are the largest employers of animators in the UK, I thought it best to ditch my usual process of animating on 1's in favor of this speedier method. 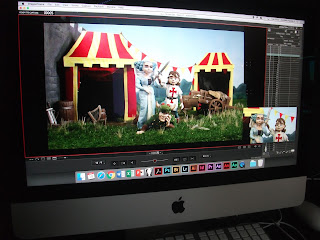 I used a rig on some shots where characters are seen from the waist up.  This allowed me to animate them walking without having to animate the legs which would otherwise be unseen.  I would ensure to also place down a flat board beneath the rig so as to create a smooth surface for it to slide across.  (See below) 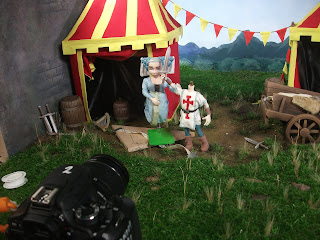 I utilized LAVs (Live Action Videos) throughout the production.  These helped me create realistic and pleasing movement from the puppets by referring to them while animating them in a given sequence.  I would cherry-pick the elements I thought were most effective in the LAVs to produce the most satisfying result.  (See below)
LAV Reference Comparison "Fight Sequence" from Gus Kearns on Vimeo.
at May 17, 2019 No comments:

As a part of the Module brief  I was required to bring on assistants to help with the project.  I attempted to work with one of the sound design students but was let down, as I mentioned earlier in this blog.  I did receive some help from 2nd year animation student Joshua Boyd in digitally painting a version of the background.  Despite the work he put in, I ended up physically painting it on the foam board / papier-mache hills.  This provided a stronger depth to the background which would not have been seen if I had used the Photoshoped image.
at May 12, 2019 No comments:

In November I enlisted the help of a music tech student to provide me with a sound design for the project. Unfortunately this individual did not deliver on the work required.  I ultimately used free sound effects and music found on online, from sites such as; freesound and bbcsfx.  I considered hiring someone to provide me with a soundtrack but I was unable to find anyone affordable enough to provide the authentic medieval music required for the film.  In the end, I used a medieval festival soundtrack found on youtube with the permission of the artist.  Once the film is completed and possibly put out on the animation festival circuit, I may decide to invest hiring a musician to provide the soundtrack.

I also enlisted two voice artists to provide the voices of the Mother and Son characters.  I found these women on Fivver.com and within a few days of communication, received the final audio files.  Although I considered bringing on a child to perform as the St George character, I couldn't find anyone suitable for the part and went for an adult voice actress instead.  Animated television shows frequently use female voices to voice younger male characters so I was not under the impression that I was doing anything out of the ordinary.
at May 12, 2019 No comments: 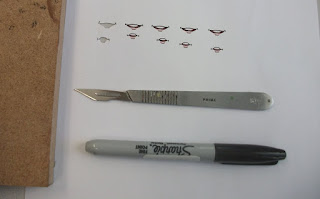 The mouths were designed in Photoshop, printed on paper then carefully cut out with a blade.  I finally inked in the white edges of the paper with a sharpie.  Terry Gilliam used this same technique when animating his paper cutouts for the Monty Python television series and films.
I designed multiple facial expressions as well as all necessary lip movements for the speaking sections of the film.
at May 08, 2019 No comments: 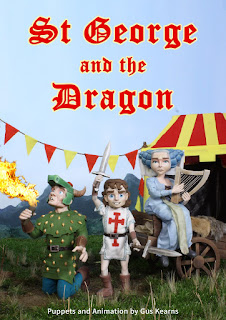 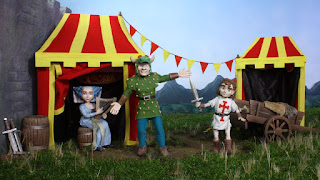 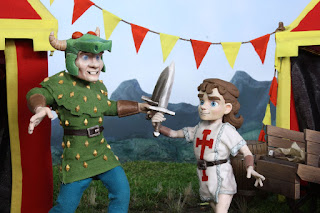 Originally from down under, Gus has professional experience as a sculptor, model maker, animator, illustrator and performing artist. He has recently enrolled into Staffordshire University to study stop-motion animation and puppet making to further develop himself by focusing all his previous skills into one future career.
He has previously received a Level 3 National Diploma in Creative Media Production (D*DD) and an HNC in Performing Arts (D) at the City of Liverpool College.
He is currently seeking student work placements so hire him today!